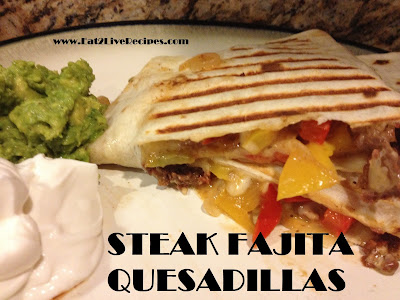 I don't know what it is, but I can't just make something what it's supposed to be. Tonight's dinner for example.... I had purchased some Carne Asada from the meat counter and thought... "I'll make Fajitas!" Result: Fajita Quesadillas. With the leftovers, I made Fajita Burritos. Why can't I just make Fajitas?! I dunno. It's a sickness. Anyway, so.....we were making Fajita Quesadillas.....

In the AM- put the meat and marinade in a Ziploc bag in the fridge. 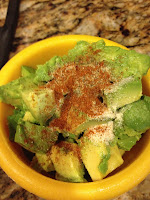 Mix the avocados with salt, pepper, & paprika. Set aside. 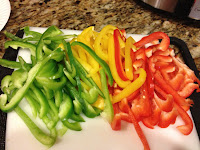 Slice up all the veggies (keep the peppers & onions separate) 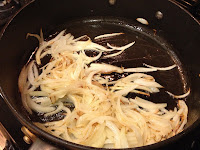 Remove from pan & set aside.

Saute ALL peppers in same pan- you may need to add more oil.

Remove from pan & set aside. 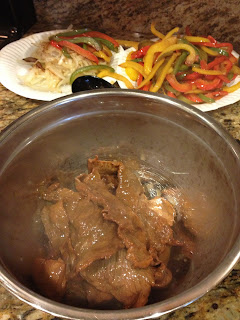 Put meat (with marinade) in pan and turn heat on LOW & let cook till just about done.

Discard about 3/4 of the marinade.

Put meat in a bowl and chop/cut up. I used kitchen shears to get the meat in nice smaller chunks.

Put meat & veggies all back in pan on low heat and mix all together. 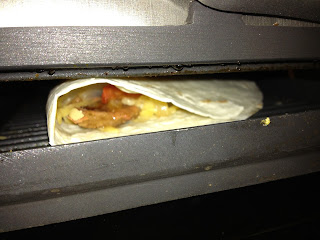 On a griddle or panini press, place a folded tortilla with cheese and the fajita filling then more cheese and fold in half.

Grill until cheese is melted and outside is browned.

Serve with Sour Cream & Guac.
Posted by Kristina at 7:39 PM