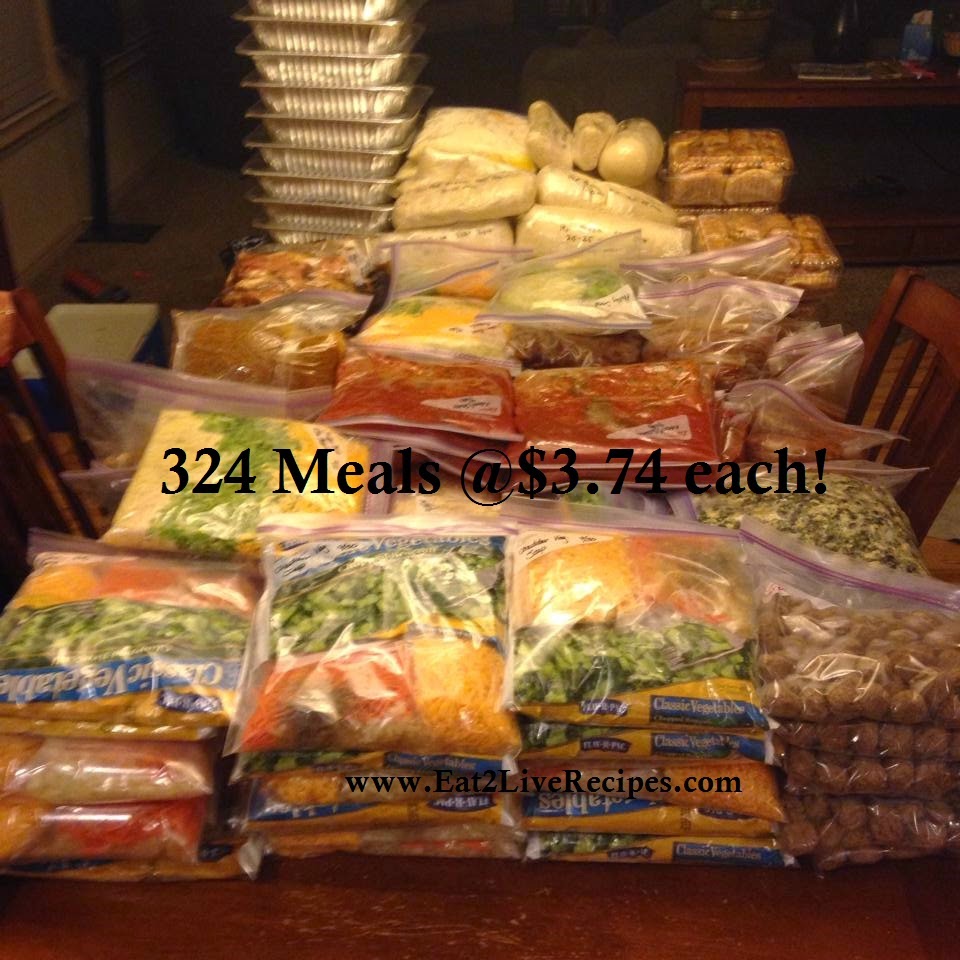 If you've been following this Blog for anytime now, or you know me personally, you will know that I'm kind of obsessed with Freezer Meals and anything having to do with making life more efficient.

I started a local Freezer Meals Swap group earlier in 2014, and after about 5 swaps decided there had to be a way to make it more better overall for those involved.  After a bit of brainstorming, it was decided to do a group swap with everyone in the same place at the same time and contributing the same efforts and dollar amount towards the meals.

I posted on the group that the first 6 people to send me $100 will be guaranteed their slot in the upcoming swap. A few friends offered to help with the shopping and the hamster wheel started turning.

I made the first list of the meals I wanted us to prepare and the amount of people that would be involved.  I decided that I would change the contribution amount to $150 so that we could make more meals with the budget.  Everyone agreed and so with 9 Families committed @ $150 each, I had a $1350.00 budget to work with.

I created an excel spreadsheet with each meal, ingredients and cost all listed out (yes, I love excel.... I'm a nerd).  Back and forth over 2 months time tweaking how everything would be prepared *down to the size baggie we would put each part into* and even a series of changing some of the meals completely to maximize the budget and time to prep involved.

Lots and lots and lots of planning!  The hardest part was the planning for exact portions to make sure each meal would always feed 6 and that our efforts were maximized during the 'BIG DAY.'


The Day Before the BIG DAY:

This was our schedule:

6am- As soon as I got up, I immediately pulled the Pork out of the crockpots, trimmed the fat and shredded it.  The BBQ Sauce was mixed in.  Then, I washed all the crocks and put the chicken in them (we figured we would deal with the 2 chicken meals later after the chicken was cooked).
7am- I picked up Moe so we could go pick up Bountiful Baskets and do the last minute shopping at Winco (Remember that $100 reserves in the budget?  That was a VERY good thing.)
9am- Met Mollie at the house and started cooking the ground turkey & rice.
10am- Angela arrives and starts slicing onions & peppers.  Moe works on slicing Carne Asada.

*Note- Make sure you have a 'Rain Man' in your group, cause when you are trying to divide 80 gallons by 45 times and put that into even cups and teaspoons....... things get crazy :)

11:15pm- We wrapped up the evening, took some pictures and patted ourselves on the back :)

Each of the 9 of us took home the following:
324 Meals of 6 servings or more each. Plus there was leftover shredded cheese, precooked chicken, and sliced ham that was evenly distributed between everyone.

The total amount of food made was 2016 portions at an average cost of .60c each.

This was a MASSIVE undertaking.  I highly suggest doing something like this no more than once every couple months.  The process going forward for myself is to get together with just a few other people and do a mini swap/prep every weekend or every other weekend.  That way there is constant replenishment of the choices in the freezer.  Even though we literally just finished up this swap, we are already planning a mini prep for this coming weekend of 4 types of meals with just 4 people.

To purchase the 'Plan' from this swap to include the shopping list and recipes, please e-mail me at kristinalupo@hotmail.com and in the subject line write: "Freezer Prep Plan."

I hope to hear your stories, lessons learned, and ideas from successful Freezer Meal Swap parties!
Till next time,
∞ Kristina